A quick walk, with results 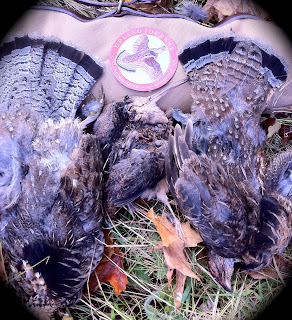 It was the official opening of "grouse camp" this weekend, as My father, my dentist, and myself rent a cabin every Fall. This afternoon found my father with a prior engagement, my dentist with being a cheerleader for his wife who decided she was going to run a marathon, and myself, who decided to take the bull by the horns, and clean up camp this afternoon.
After using the vacuum to suck up minimal dirt and the remnants of the eurasian beetles that make themselves at home in the wood, i found myself with a couple of hours before sunset to hit a few covers.
This first cover was hilarious. It started spitting rain along with our 20 mph north winds the minute i opened the jeep door. So while i was asking myself why didn't I just stay at camp,  a young brown phase erupted less than 10 feet from me. I was so surprised that he was that close, i airballed. Dottie didn't even scent him, so i was surprised to say the least. I followed up , but flushed another adult bird on my way to end of the trail, he was in the cut pretty far, and offered no shot.
i decided to work through the cut in hopes of finding him again, we were almost back at the jeep when dottie locked up on a grass and wood pile. (NO WAY) i thought. that little brown phase comes flying out offering me two easy shots going away, miss, miss.
I had to laugh. 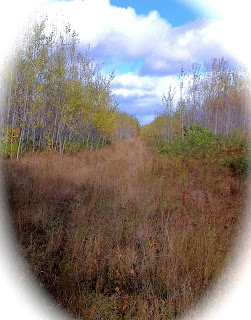 So i followed it into the other side of the cut, Dottie catches scent, and I ready myself, just in time to have a woodcock flush from under her nose. The little brown bird tumbles against the backdrop of the enormous coldfront that rolled into town last night. It certainly wasn't what i expected to come flying out of there, but a pleasant surprise to say the least.
After putting the doodle into my vest Dottie points again and her bell is silenced. My third opportunity at that little brown phase leaves my the easiest grouse shot in the open I've ever had. This time i actually do my part.
I decide to walk by a small Brook trout stream on the opposite side of the cut (mostly to see the spawning jewels of the North) when the bell goes silent again. A Grey phase swoops from a tree limb downward towards the swamp alongside the river.
It was out there a ways, so I squeezed my back trigger, and by dumb luck he tumbled to the aspen leaf covered floor.
I certainly wasn't expect this this evening, but i felt did enough harvesting for the day.

So Dottie deserved "shotgun' in the Jeep on the ride home complete with her favorite blanket, you can tell by the picture, she was quite happy 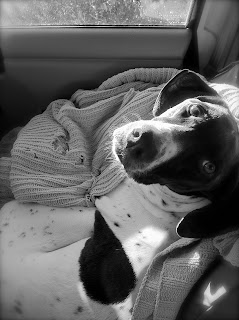