A TRIPLE ! swear to God! 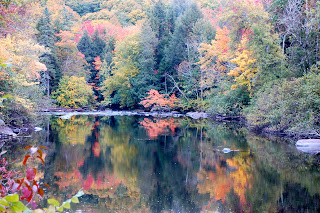 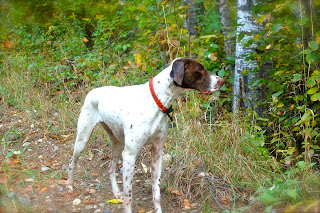 Its one of those things that will never, ever, happen ever again. So I'm just gonna cherish it, and my season has already been made.

It was going to be a cool weather morning, and the rain was expected to stay away till at least noon, so i took Dottie and a friend who has been bugging me to get out. The foilage is still REALLY thick at this stage in the game, so i remembered a cut i haven't hunted in a few years that offered a bit of a trail alongside some older aspens, and some berries of all different sizes and varieties.
nate and i had let dottie go, (she's a bootlicker, so no astro needed) and started our gait, from about 100 yards down the trail she was already getting "birdy", she had a nice point on an adult bird that Nate barely caught a glimpse of.
I was just excited she had a nice point and contact , as i wasn't expecting much.
just like clockwork, she got birdy about another 100 yards down the trail, this time pointing off to the left, we followed her in, but nothing there, the minute we came back onto the road, she locked up on the other side, FLUSH, it offered me a fleeting shot , which i took, and blissfully airballed on my first shot of the season (AH YES)!
Just after i shot, i heard another flush off in the distance, and that alarming chirping we sometimes hear. there she goes again, locked up, I had to snap this photo: (above the text)

Two smaller birds flushed from ground to WAY up into the trees (I'm talking like 50 feet), I saw one but didn't feel like "treeing" a bird, especially a young one.
I was already happy with the day, Dottie was great, we saw some birds and it was a positive sign that at least some birds had made it through the spring.

WE walked for about another 15 minutes, when Dottie started getting REALLY birdy, like dropping her whole body to about an inch off the ground birdy. I had never seen her do this before. It was right at a waist high berry patch. as soon as Nate and I stopped, five birds erupted into the air. i mounted straight out and fired, two birds fall, (theres still three birds in the air), and swing as hard as i can to catch up, and pull my back trigger, another puff of feathers.
REALLY a TRIPLE? I couldn't believe what just happened. Nate was already going in to help Dottie find dead birds, and more birds started flying. Nate pulled on a hard right to left crosser, but didn't connect.  I couldn't even shoot cause i was so in shock.
Needless to say i put the three birds in the bag, and just slowly sauntered back behind Nate on the trail. We ended up bagging one more birds, and had a few more nice points and opportunities, but i think my season was already made.
Posted by Jackson at 11:47 AM