The tide, Youth day, and one gorgeous sunrise 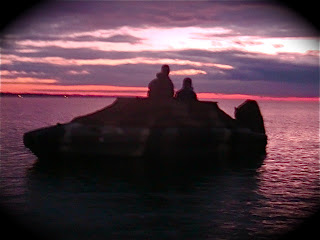 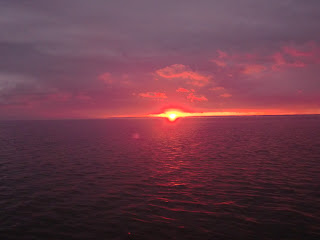 The darn tide, most people never even realize that the Great Lakes or the Bay of Green bay even have one.
I went scouting last week to try and find some suitable places for Wyatt to go under the "mentor" program, for youth waterfowl day. I thought we had some pretty decent places mapped out. We were the ONLY ones at the launch by 5 am this morning, and seeing as how shooting time was roughly six, I thought we were for sure going to have a banner day.
Well, the Bay had other plans. The prevailing winds should have put PLENTY of water in the rushes for me to pull my boat within three feet of the aquatic vegetation (it only drafts 6 inches), but we coudn't get within 50 feet, which wouldn't have been a problem but our shooter didn't have waders along, so we went for the next best option , open water hunting.
Not exactly perfect for puddle ducks, but the only option we had left, we set up the legal 500 feet from shore and hedged our bets. We got a few looks from some mallards, and even some early season divers (which i was quite surprised to see) but now quality shots were presented. its tough enough for an 11 year old to hit something while remaining stationary, and the boat and been rocking pretty good.
Just when we had about given up hope, a lone honker had cupped his wings and presented us a shot, we weren't on the mark, but just had a quick chuckle, and enjoyed which was truly one of the prettiest sunrises I've ever witnessed.
Wyatt can't wait to go out again, so unlike the video game era of today's children who try something once, and quit if they fail,  Wyatt wants another shot, and I'll be ready to help him get it!