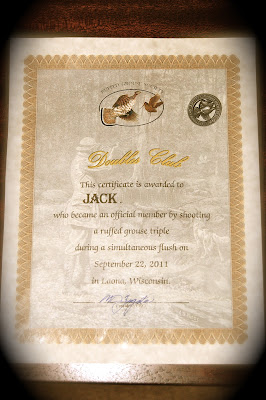 As some of you have read from a prior posts on here, i was part of the stars being aligned, and also waiting for lightning to strike my gun, as i was part of a rare "triple" on ruffs this season.
The Ruffed Grouse society has a club, in which you have to be a member to qualify, but none the less have to sign an affidavit to say you shoot two simultaneous birds in the air at the same time, also a witness. They keep track and then you are listed in their all time records.
Besides this nice little plaque certificate, they also send you a silver pin with two birds on it.
it was a much nicer award than i thought it would be, and it was free!
Anyway, not much to see here, but i thought some of you might enjoy seeing what they actually send you, its quite nice!
Posted by Jackson at 11:02 AM