I-DA-HOpe I can go back! 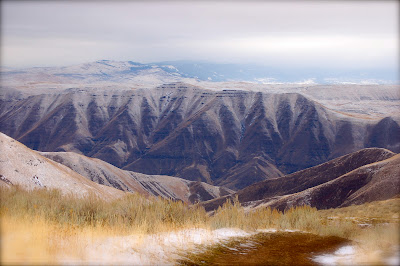 I have been hearing what a great upland and waterfowl state Idaho is for at least a few years, from the one time CA resident and my best insurance provider R. Crosby. he liked it so much, he uprooted his family and moved there.
Right from the get go the scenery was absolutely breathtaking. the first day met us with a snowstorm and icy roads. we had tried to hunt the area just on the border or Oregon, and the famous "Hells Canyon."
It didn't take long for us cut a Chukar track, but as usual, the terrain was just ridiculous that these hell chickens dwell in. The rock,shoals, and 80 degree incline combined with a layer of ice and snow, made it nearly impossible for this flat lander to keep his feet and become a member of the under forty hip fracture club. I knew I would have to save some energy and didn't want to burn out within the first hour of the hunt, so i urged Ryan who had been chasing big game through these mountains for the past couple of months to continue on a brief quest to track them down. 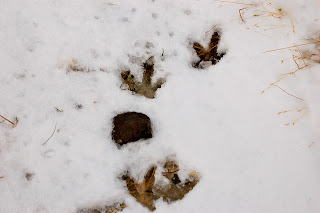 He ended up flushing two of them , but no shots were offered. i didn't feel so bad as I watched him come down the hill and fall keyster first onto the slippery grade all with a big smile on his face.
We thought we would drop a little lower and try for what was usually a sizable Hun population at a little flatter and less snow accumulated hillside.
It looked perfect, offering enough rock for hiding spots, and plenty of what we call cheat grass here in the Midwest.
We worked the fabulous looking draws and rock outcroppings for a couple of hours, but it just didn't seem in the cards today. On the bright side, I think I'm evolving as a hunter. I flew halfway across the US, it was 11 o clock, I hadn't flushed a bird , but I could stop gazing at what I was surrounded by. I can honestly say I had never felt so minute, so alive, and  so aware of my surroundings. It was a cathartic feeling, that few to many city dwellers every get the chance to experience. 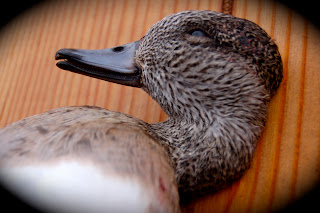 The next day found Ryan and I heading to the fabled Snake river. I knew I was in for a treat just from the variety of birds and and lack of competition that I was used to here on the ever popular Green Bay. Wading across waist deep current at high levels is always a challenge, but it was SO neat to see Decoy, (Ryan's dog) use strategy in the angles he swam at  downed birds. he's one heck of a gritty dog, not sure I've seen  one more willing to withstand the elements. It wasn't long before we had drake mallards, wigeon, (as pictured) gadwall, among others finishing to our spread of only 11 decoys. If I lived here, it would hard to ever go to work with the ample opportunities of game around every corner.
Tired from the previous two days, to much 44north vodka, (which is fabulous and made from Idaho potatoes) and my well worn body that has been at it hard since mid September, we decided to chase some roosters and quail around his house. we had a few chances at both, but were to busy jaw japing, watching sunsets, or capturing the shots of the trip with my camera. Oddly enough, I didn't care. I hadn't harvested one upland bird on this entire trip, but I did shoot something that  knew would be much more important. I managed to have the perfect light, the perfect backdrop, and capture the perfect moment between two partners that Ryan will cherish for the rest of his life. I was lucky enough for someone to catch a shot similar last year, right before I lost Kwik. the bond between a man and his first real bird dog is like steel. It's the strongest, hardest, and one day coldest thing there ever is, BUT shots like this will always bring a smile, and admiration for the owner, forever. A toast To DECOY! 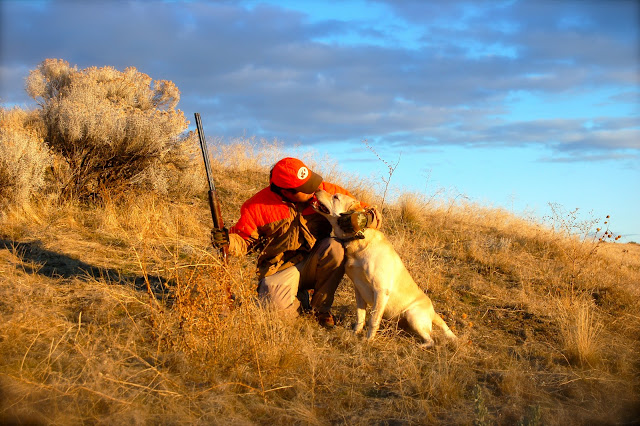