A snowy, uneventful, ending to the best season ever 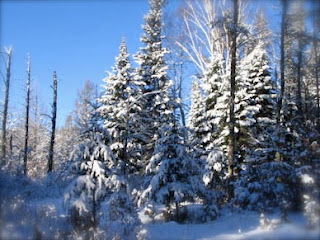 What a year.
From the vast ebbs and flows of too windy to hunt, to the extreme heat in the middle of October, this was a year of extremes. So it shouldn't have come as a surprise that a cold, snowy morning met us on our closing weekend of "grouse camp." We usually end camp a week earlier, but thought It might be nice to be able to hunt a weekend longer, i can now say that we probably wont do that again next season.
We always thought "snow hunting" would be a lot of fun, i can now attest, I prefer no snow, none at all. the grouse seem to go and hide in places i have yet to figure out, but I can be sure its not tag elders, lowland pine, swamp, etc, because we worked all those things on Saturday.
Not one single flush made itself known to us this day, but that was OK. we were simply exhausted after working three straight productive covers and letting nothing but snow down the back of our necks Dottie was freezing, chaffed, and beat from the long season that she just wasn't willing to give up on.

We had 50 flush days, got into a nice flight of woodcock, Shot extremely well, and enjoyed each stroll just a little more this year. Maybe it was maturity? Maybe it wasn't? One thing is for sure, i feel a threshold was crossed this year. Dottie made her place in my grouse history as the best pointer I've had. I did end up hunting by myself this season more than years past, which i thought I would hate, but it was quite the contrary.
A closing of another Wisconsin grouse year, lets hope the cycle can remain steady for one more season.
OFF TO IDAHO!
Posted by Jackson at 8:59 AM