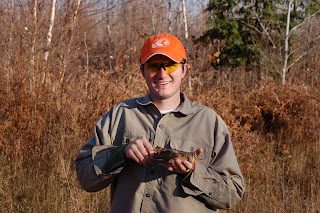 It was the last weekend of our Woodcock season, and they are my trusted partners favorite bird, so I felt a little pressure to take advantage of the nice November weather we had been having, and go to the ONE spot that if there are doodles around, it will produce. Joining us this day was Bob's son Christopher, "esquire" for his first hunt after the long bill.  It didn't take long for Dottie to get birdy, I have no doubt she was trailing running grouse from her pointing style, and the amount of point and stalk instances that were occurring. Then came the staunch, low bodied curl that usually means Woodcock. A quick tramp around a ten foot area resulted in a quick brown feathered friend in the gamebag, then it turned into The shooting gallery that it usually is.
Christopher sporting his 28 gauge and a much quicker gun mount that his father connected on his first with a great shot and big smiles!
After we had three quick birds in the bag, we thought we'd leave some for the sports in Louisiana, and decided to move on to some more productive (or so we thought) grouse covers.  Some of which had produced double digit flushes in small area just two weeks prior.
It just wasn't in the cards today for ole ruff. I'm not sure if someone had just worked some of these areas just before we got here? If the winds or weather changes had put them into the thicker pines? Or, the birds were simply running so much, that we couldn't keep up with them. We saw a couple, but nothing like the weeks before.
I found out later, that a close friend of mine was having the same exact issue in the same general area, and had actually witnessed birds running in the aspen away from his dog on numerous occasions that morning.
After a quick of Chicago style hot dogs and Italian beefs at the "Green Shack", our bodies were nourished and legs rested. Trying to think of a place that had entirely different cover that what we had previously been working, bob and I realized we weren't so far from one of those places, "Kwiks last trail".
I have this cover described in a much earlier post, but it includes a beaver pond, swamp, aspen, pretty much everything on the planet, but its a good half mile walk through unproductive cover to get through it.
About half way to the good stuff, Dottie slams on point, so serious that I KNEW a bird was near, but WHERE? this was a terrible area for classic grouse cover?
As I'm looking around a grouse bursts out a pine/ dogwood cover and Bob connected with is little 28 ga of Turkish origin. 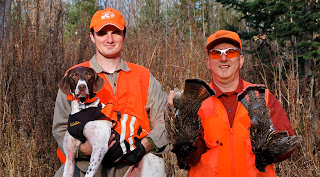 I cried enough on this trail last year, but inside I was crying again. Kwik came through again, like he always did, even Bob mentioned that he knew he was looking down on us and made sure we got one on his trail, he would have it no other way.
After working the entire cover and putting up a few more birds offering no shots, we started our venture back. Dot jumped into the thickest patch of tag alders I've seen in years. it was going to take me five minutes to get where she was, but she was unrelenting, so i had to jump in. Half way into it a red phase offered me a small window between two large pines, I fired two quick shots and it miraculously fell. A great day shared between Friend, Father, and Son.
Posted by Jackson at 6:44 PM