After spending the majority of my vacation and the early part of October chasing grouse around the aspen jungles of Wisconsin, I decided I was going to put a week long effort into chasing the large variety of fowl we have in our fine state. 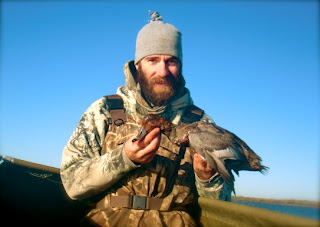 With new friends and old, it was a week to remember, Although the shooting was never completely "fast and furious", we found great variety and some fantastic specimens.
Here is mark aka "The GOOZENAZI" with a nice drake redhead that never would have made it into our boat, as my first shot was a good two feet behind him.

It seems like this year the weather has been of the extremes. Sometimes having so much wind that even a seaworthy vessel would be taking an unnecessary chance with ones life, so a few days we decided to keep it a little closer to shore than I would have preferred, but it TOTALLY paid off! 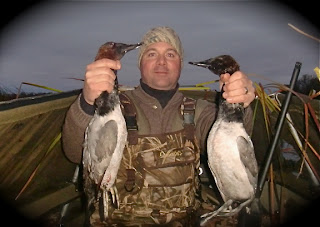 On those classic grey days like shown the picture on the left, with two great canvasback bulls, you just cant help but feel the chill of an early Winter on it's way. Having the opportunity to share the blind with a lifelong friend and one gigantic thermos of coffee keeps the soul warm enough to brave out the inclement weather. Laughing at the same dumb jokes and anecdotes for the last 25 years, certainly hasn't got old, but we are starting to. We start talking about our bad hips, sore knees, and hairlines that move just a little further back each Fall. 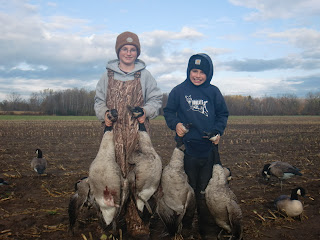 As a change of pace, Even more friends (and their boys) decided to hit a traffic field for some Canada goose action. The opposite end of the spectrum for wind met us that morning, all 2-3 mph of it. Giving those smart, old , and  pressured honkers more time to analyze your decoy placement and to make out your "hide of blind" never makes it any easier. A small raincloud made our decoying life MUCH easier and it didn't take long to add smiles, and talk of going out to breakfast to celebrate. Its amazing how your perspective changes when the day is seen through young, wide eyes. 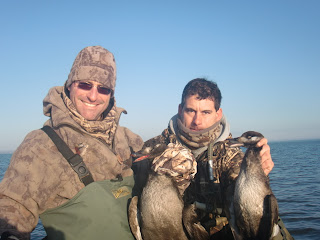 Last but not least, it was kind of exciting to have multiple chances on small flocks of Sea Ducks, I love the way they decoy, but not necessarily the way they taste. Some Scoters are very large ducks, and decoy with reckless abandon.
Their tough enough to bring down, especially after shooting bluebills, and redheads most of the week.
Randy had to do a little emergency surgery on me about an hour before this picture was shot, as half of an earplug broke off way up inside my ear. a flashlight and a long nosed leatherman lent new credence to the Army way, of always being prepared!  It truly was a great week, blending new and old friends, and more experiences to the highlight reel that seems to become distant memories with each passing year!