The O.B.G.C. 2011 had high hopes after yours truly had done a good bit of scouting/hunting and groundwork for the foursome who had started this tradition just 6 short years ago.
We were going to be one member short after a heel spur and a meeting with a slamming screen door and all but guaranteed my father wouldn't be joining us this season, we raised a "few" glasses in your honor.
Paul ( my brother in law) and I drove up together on thursday night, and created the aroma of the culinary favorite of frozen pizza and seagrams 7 in the a frame of happiness. 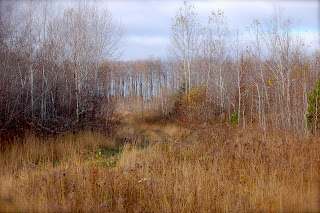 A breakfast of eggs over easy and way to much bacon was enjoyed by both of us, And the only finicky German shorthair eater I've ever met, miss Dottie.

We started our morning at what we like to call "tick heaven", which populates the deer variety to almost plague levels, but the amount of ruffs in this place, makes it worth the risk.

Paul was absolutely ecstatic with his first shot of the trip to harvest his first 'BRONZE" grouse of his life, and only the second one i had ever seen. 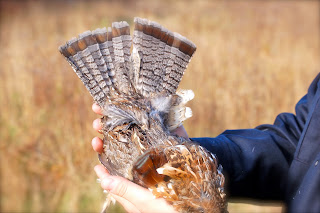 That was until we walked 500 yards and I shot another one, UNREAL! I knew this season was going to be special when I shot a triple, but TWO bronzes on the same day? Ic need to buy a lottery ticket 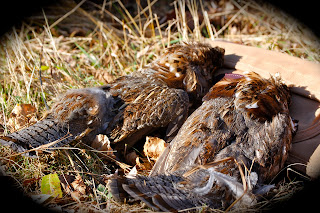 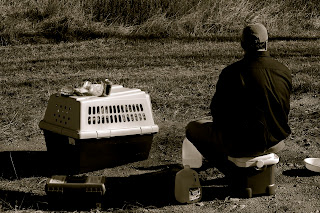 Both paul and I are now in our mid thirties, and have been trying to eat much healthier, so instead of the bar hamburger and fries. I decided to pack a "gluetin free" lunch of almond butter sandwiches, dried fruit, and plenty of beef jerky. hey , we all have to start somehere.

A few rudimentary english boxlocks, with origin dates back to the 1920's, I know its not a borowed Purdey or Holland and Holland, but that suits us just fine, but not the other three grouse. 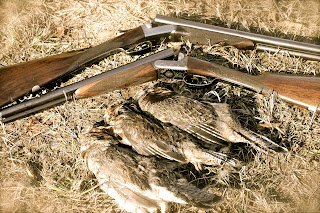 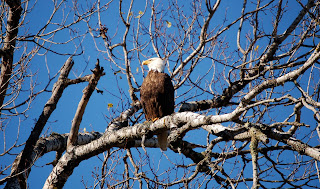 "Sam" is ALWAYS helpful in getting rid of the contents from the guthook application on my knife. He sits and waits so patiently, but I have to wonder if he'd prefer the breast meat and legs instead. So majestic, so flipping big!

The second morning we were finally joined from our favorite teeth junkie who is just here to 'take it all in."  Its rare we ever get him to pose for a picture, so i knew after all the contacts we had today, I better take advantage of the situation. 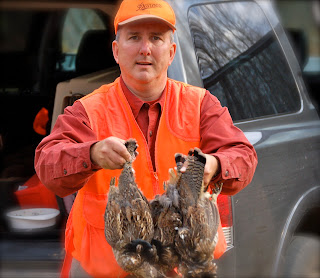 Although our shooting was pretty much terrible over the past two days, we still managed to take a few more birds than last season, and hunt a few less hours. It's really bad at my age when your hips and spine really cant function without Advil after a all day grouse affair for a couple of days, BUT its a great time to be sore, that is October, and it is GRAND!
Posted by Jackson at 11:55 PM