To see, or not to see 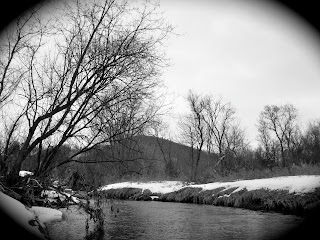 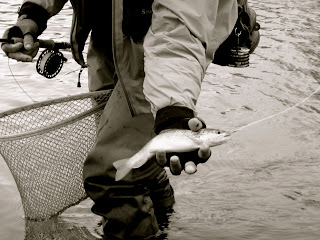 For that is the question!
As the 5th of March and our catch and release season came upon us, the sullen tones of a grey sky, and a white backdrop meshed perfectly with below freezing temperatures and a bitter wind  to remind us where we live.
The mid April days forthcoming with the sweet smells of wildflowers, and gentle warm breezes, were the furthest thing from our mind as Nate and I entered the just above freezing waters of Southwest Wisconsin. It didn't take long for the gradual build up of ice in the guides to hamper in already rusty casting stroke and make me question if my usual pilgrimage to this area was a waste of a 3 hour drive?
The question was answered in a relatively short time. On my 5th cast to a giant pool I made one quick mend upstream and saw a very subtle pause on my strike indicator. To my surprise, a small, fat, 9 inch brown had decided my zebra midge was suitable fare, and made sure I couldn't even screw this hook set up as he ingested the fly. A quick hemostat procedure on the barbless size 22, and the little guy was back swimming towards his favorite run.
Nate had started a little further downstream, and was working his way towards me. He hadn't had any action as of yet, but turned the corner just in time to see me hooked up with a little nicer fish.It was nothing to write home about, but a much better specimen than my first. I stayed in the that first pool and had approximately another 5 fish,  while he jumped ahead and had his first action of the day.
The fishing seemed to pick up for the next hour or so, around the twelve o'clock hour. It was a bit odd in the fact that the temperature hadn't deviated from 31 degrees from the time we left green Bay, to the time we left SW Wisconsin.
I had been commenting to Nate how that might be the only time I had observed the outside temperature remaining constant from 6AM, to 6PM.
The surface activity had been dormant up to this point, and I have a general disdain for fishing midge on top, so I wasn't expecting to bring out the Aquel at any point. As usual, my general impatience for doing the same thing over and over again got the best of me. As I watched fish after fish rising to feed on the all but invisible bug, I decided it was time to "fish blind."
As if actually trying to tie the size 24 griffiths gnat isn't hard enough to do in these temperatures with dwindling dexterity in my already frozen figures, I figured I'd try to go blind by squinting for the next hour trying to actually see the fly.
After false setting on at least three fish , I finally hit pay dirt. After he made his way into the net, I took a second to revel in my first midge fish. As cold as I was, I was pretty excited. I picked up a few more fish on top before being broken off, by a pretty large fish who made me look completely inept.
By the 2 o'clock hour Nate and I had had our best opening day even as far as fish numbers go. Our numb feet had decided to to lose feeling about the same time, so we knew it was time to call it a day.
As I look at our forecast for midweek, another 12 inches of snow is scheduled to come our way, so I think we'll pass on this coming weekend, but then after that? Here we come, with no fear of any bug we can see, or not.
Posted by Jackson at 10:55 AM