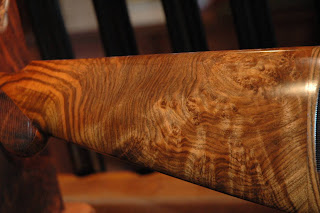 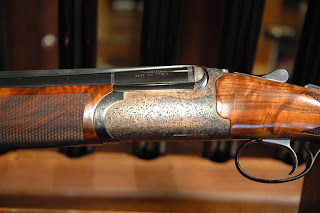 After much convincing, and a little but of nudging. I finally convinced my dad to "pull the trigger" on his dream gun. He has been selling off more than a few of his doubles lately, keeping the mind set that "he simply can't shoot them all", and even if I did, I'd just be less than adequate with a lot of pretty guns".
He mentioned to me that someday he'd love to have really nice little over/under. I had been on the search for what he was looking for no less than the past six months. Then like a chorus of angels signing their glorious tune, it spoke to me. Having looks that closely mimic  a Farmars than any other over under I've seen, and with a NEUTRAL cast? You've GOT TO BE KIDDING ME!
After he saw it I knew he was in love, but he was still concerned about owning a really nice gun. I told him he deserved it , and the rest is history.
He finally found "his baby"
Congrats dad, it the nicest shotgun I've ever handled, and probably ever will!

ALL HAIL RIZZINI ROUND BODY
Posted by Jackson at 6:56 PM