Cool as a Scaups bill 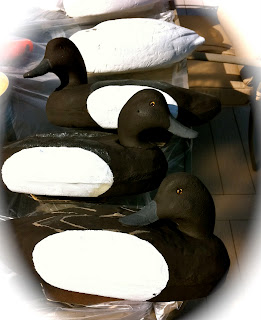 Sometimes you just get lucky.
There's really no explanation for it, nor evidence on "WHY" I deserve it, but somebody upstairs must have been looking out for me, or thought I deserved a break.
My buddy Randy and I were chatting about the upcoming Wisconsin waterfowl season, and how excited I was to actually get after the divers that frequent Green Bay from about mid October until freeze up. Randy said "you know what, i had a buddy from Pennsylvania who gave me a bunch of Bluebill dekes back before I got married,(which I think equates to at least 15 years ago) I have no idea the maker and their condition is probably terrible, but you can have em if you want." I told him about my idea to flip at least three dozen of my old diver to old squaw, ("longtail duck" if your a politically correct puke) and that it would be much appreciated.
As every good military man should be, he was right on time with his delivery to my house, and my already grateful demeanor turned to outright shock.These weren't just Herters old foam decoys, these were homemade, and no expense was spared in their assembly.
Sporting such luxurious features as real glass eyes, wooden keels with weights attached to them, and the vast majority of them having what I can only describe as some sort of restle type coat on them, my plans immediately changed.
There was no way I could crucify all the hard work some guy on lake Erie (we later found the origin of the original maker and owner) by turning these birds to some dumb sea duck. These were going to remain bluebills, and I was going to give them a little makeover. thanks to my buddy Mark at Parker paints,  i loaded them up with Uvision white (ultraviolet), some flat back, and a plethora of greys found in the lesser and greater Scaup.
the neatest thing about these dekes is the pellet holes and pellets that still reside in some of them.  No doubt from the days when lead shot was the norm , and and the gold standard.
I'm proud to add another chapter in the long lives of these blocks, man the stories they could tell, and maybe someday will, when I pass them on.
Posted by Jackson at 4:40 PM