PIPE TOBACCO, Smallies, and me attempting to row 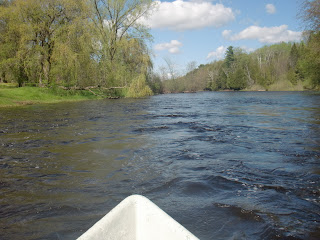 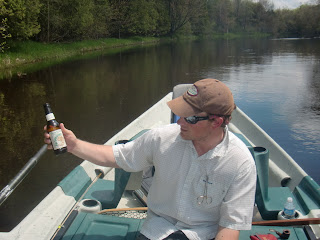 That's just a recipe for a good day, who in their right mind could be stressed out with those simple ingredients. Nate ( yes, THE Nate Sipple) and i decided to light our briar's, make a few casts, and once again coach ME on how to become a better drift boat captain.
He was in total "guide mode" and would even let me tough the oars until I had boated like five fish. i just about had to pry his arse out of that seat, but he was happy that i did, and he caught some fish himself. WE even had a boils from a  few angry Brown trout, which always make this stretch exciting. WE had laughed and mutually agreed that we were the best smelling boat in Wisconsin this fine day, with (two different type of tobacco embers) burning the sweet aroma that even my wife doesn't mind.
A few grouse drummers reminded me what was to come in just four short months, and that they to were SICK AND TIRED of this non existent spring that we've been through.
AS usual we laughed a ton, made fun of our friends idiosyncrasies, and talked about how lucky we both were that our hot wives married us. A brew or two MIGHT have been cracked, but at the end of the day, I think Nate likes to fish more than any man I've ever met, he Literally won't stop until you tell him too.
He's a fantastic Steel head guy and guides trips for migratory browns in the fall. He has a GREAT blog at THE MEANDERING TRICKLE, that I strongly suggest you follow, he has great stories.
thanks Nate, awesome day!
Posted by Jackson at 10:53 PM