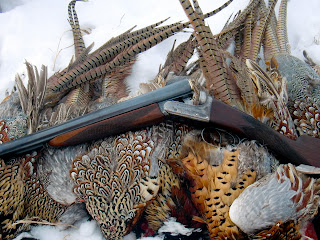 What's a guy to do?
It's mid February, it's 30 degrees, no wild bird hunting season open,  and my dogs are driving my wife insane. Both dogs have learned the "I have to go to the bathroom", but not really, trick. Just stand by the door and whine so I can chase any living creature around our yard. Let me tell you, nothing from opossum to house finches are safe.
So, I mustered enough gumption to head to our local "pheasant" farm. My friends and I usually scoff at this activity, and would chase wild birds given any other viable option. The fact remained that I had a new gun to shoot (one with double triggers no less), and I better figure out know if I can make it happen with this piece of British ware.
I brought the old dog along, who has made a MIRACULOUS recovery from this fall when he was given approximately 2 months to live, as both my wife and I agree if "it" happens in the field, there couldn't be a better way for him to go.
We put out ten birds, and made quick work of the first 5 sorgum rows of rows, putting 9 birds in the bag. We hadn't even taken a second shot, and I was starting to really pat myself on the back for taking a chance on this gun.
Then it happened, a bird flushed extremely far out and almost out of what I would attempt a shot at, and somehow in the back of my mind I said "pull the back trigger", I did, and the bird fell. I must have simply broken a wing as he was still running to beat the band. With deep snow, and a 75 pound differential, the bird quickly put distance between him and Kwik.
A very diligent search led to nothing, no feathers, no blood, it was pretty weird. I figured we'd just take another trip through that area, when Kwik's head went straight up in the air, like he could smell something, but i could tell he wasn't even sure what to make of it. Another 40 yards later, I saw one speck of blood, then two,  and the old boy mustered up enough pep to look like a nose tackle running down a wide receiver.
The race was on, and he wouldn't be denied. 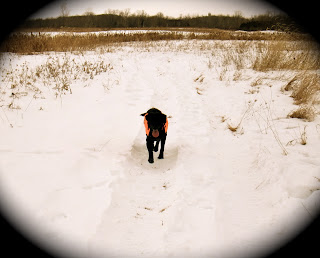 When he finally caught up to the bird, he gave him an extra head shake, pinned him down, picked him up, and did the slow trot , all the way back to me.
My friend Joe asked "does he always strut like that after a bird?"
I said "Just today"
Posted by Jackson at 3:31 PM